A walk past timber skeletons and heavy machinery, through the dust and haze of waning afternoon sunrays, up the narrow staircase above the carpenter shop and directly into other people’s lives – a chaotic lexicon of thousands of pieces scattered, stacked, filed, layered, lost and found, trimmed, sliced, and glued pieces of lives waiting for resurrection.

Lance Letscher assembles and reassembles this universe into a carnival of collaged art exhibited throughout galleries in the United States and Europe as well as in several books. But perhaps none of those showcases feeling quite so viscerally present and immediate than the infinite pieces of pieces surrounding us covering every surface in the studio.

Where do you find your materials?

For a long time, it was certain dumpsters; half price books etc. The stuff that gets thrown away usually is the material that has the qualities that attract me the most:wear, grime from long use and handling, marks and doodles etc. At one point, maybe fifteen or twelve years ago, I would drop my younger son into the container and point and he would do the dirty work. He’s 20 now, but a couple of years ago he gave some girl a waffle iron that he snagged on “big trash pickup day”. She wasn’t as happy about it as he was.

Do you think the materials guide your work — which is stronger: the identity of the materials you work with or your artistic will?

The work guides the work and the material choices. I am a disciple of “the unseen hand”. I am all about working in a way that takes as much of the control away from my conscious mind as possible. It (the work) has a life of it’s own, I just try to stay out of the way as much as possible. The “dreaming mind” is much more powerful than the “thinking mind”.

Do you feel that your work preserves the elements it’s made of? Is there something that attests to the past life of those materials or do they become fundamentally altered to where they’re no longer meaningful as anything other than the new whole which you’ve created?

I love the traces of other peoples lives and thoughts that become a patina on the stuff I use. Especially when I see things that little kids did in books 50 or 100 years ago. They were bored and, I think, more creative because of it. At one point, I stopped listening to the radio while I worked (I work alone) to promote a more profound sense of boredom which I hoped would improve the work.

The work did get better, but it has made me into a very dull person, especially socially. If you have ever seen the Philip Guston painting where he shows himself as a giant grotesque eye – you can grow an eye like that if you are willing to force yourself to abide in this level of absolute and excruciating boredom. It is very dangerous though. There comes a certain point when you would do anything to escape…this is partly the reason for the high levels of drug abuse and alcoholism in creatives. Plus, the big eye takes an enormous amount of energy to run.

When you finish a piece do you generally end up with what you envisioned at the start or is it something completely different?

I never pre – plan. If I accidentally do, I sabotage it when I am fully committed.

Because your work is made up of pre-existing pieces, do you feel that it’s wholly your own or is it a collaboration with some unseen partners?

Describe the process or steps involved in physically making a typical piece?

Gather material into piles according to something; color or whatever. The piles = the pallet. Cut pieces to make parts. Assemble the parts or components from the cut pieces. Glue, press and re cut the parts to their finished shape. Assemble the parts into a preliminary composition without glue. Mess with that part until the composition starts to become interesting. Transfer the parts onto a board with glue and press. Allow several days drying time. About three quarters of the time, I end up cropping or cutting to re assemble after it is dry and I can really see what it looks like. This requires a table saw since the piece is backed with wood at this point. Usually, I work on several similar sized and themed pieces at the same time, so I have more raw material to work with when it’s “table saw” time.

If you look closely at some of my work, you might notice that the backing board is sometimes five or six layers thick. Each re assembly requires a new solid backing board (glued and pressed again)to hold everything together. The thicker ones were harder to resolve. I don’t really have any other trade secrets. Change your blade often. Cut away from yourself.

Do you sketch out ideas regularly and, if so, how many of those become a finished piece?

In one sense you have a great degree of geometric precision in your work but on the other hand you also hand-make everything so there’s an inherent impreciseness as well. Could you comment on that dichotomy?

Within every man, a war rages between the forces of good and evil, darkness and light. At stake in this battle are the mind, personality and soul. My work is about this interior landscape and drama. Sounds corny or ironic, but really that is the crux of life that runs the gamut from the very mundane tensions and challenges to full blown emotional and psychological crisis that we all have (or will) experience. I heard a primitive Pentecostal preacher on the radio over twenty years ago say it this way (I’ll paraphrase but it stuck with me) – The universe is vast and probably teeming with life both superior and inferior to our own species. But there is one important fact that distinguishes the Earth from all of the other planets in all of the innumerable solar systems in our infinite universe. The Earth is the planet that Satan fell into after his rebellion. This is the land that he inhabits and prowls. And this is where we abide as well.

In many of your pieces there’s also an absolute chaotic overload and destruction of precision in the composition but the pieces are often things associated with precise mechanisms (gears, ladders, tools). What is the idea you’re exploring there?

Ditto. Some of the “building” pieces are more simple in regards to this dynamic. They are dysfunctional models that have a feeling of precarious equilibrium that I really identify with and see as a very prevalent state.

What attracts you to typography and letterforms and what is the meaning for you in their reassembled, somewhat abstracted, finished products? Do you intentionally strip the meaning of words by re purposing the building blocks from which they’re made?

I think that the use of letters has started to function in several different ways in the work. At first, it was about chaotic and incomplete thinking (this also applies to the question about gears and ladders). A lot of the pieces are maps or diagrams of mental or psychological disjunction and disassociation. This isn’t really a conscious choice of direction, but it is a definite theme in the more recent work. The other thing that some of the letter pieces do is set up a “teasing” dynamic with the viewer. I wanted to hint at certain words or phrases and then undermine that momentum with a lack of completion or a change in direction or expression, mid word or thought. So, yes, I think that you hit the nail on the head.

There seems to be the touch of a child in a lot of your work… be it through the scribbled drawings or the cutouts from what seem like educational books. Is there some inspiration from your childhood or the ways in which a child perceives the world that you’re translating?

No I think that it is more about the expression. Children tend to be expressionists first, but it is often dismissed as poor mechanics or skill. Same goes for the art of the psychotic.

How do you feel about the state of contemporary art? Is it a time of vibrancy where more artists are living from their work or is it more of a struggle than in the past?

Art magazines are extremely depressing. Making a living from your work in no way serves as an indicator of quality or substance or achievement. The real struggle is the same – how to be creative without being imitative, how to avoid apathy, confusion, complacency or self sabotage. How can a person with profoundly limited resources create something that is meaningful, long lasting and maybe transcendent? If you are really going to do something important..make real art, how do you do it and how can you keep doing it over time with the hope that it might get better. If there is a “struggle” involved in being an artist, I think it is more about those issues; interior issues as opposed to the exterior endorsements or criticism.

Where do you go or what do you do for inspiration when you’re jonesin?

Motorcycle magazines. I like the design/art/culture mags like “DAMn” too. I usually just start moving my hands and putting stuff together and then I’m ok.

When you think ahead to the future, what are some things you’re looking forward to accomplishing?

I used to want to win a Macarthur fellowship really bad, but I quit thinking about those things at some point …I guess I want my work to get better. The future is never what you think it’s going to be. 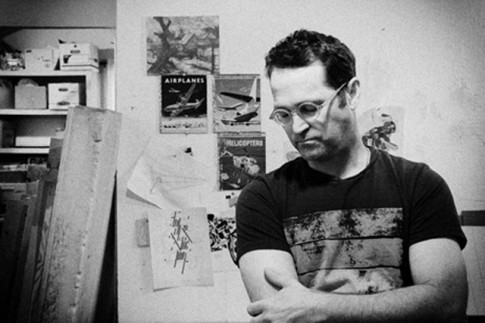